Before the Reindeer – A holiday tale with many tails 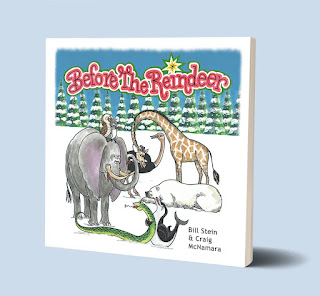 What if an elephant pulled Santa Claus’s sleigh? Or an owl? Or a snake?

The fun and surprising answers are found in Before the Reindeer, a new children’s book self-published by Minneapolis writer, Craig McNamara, and illustrated by his father-in-law, Bill Stein. Through rhyming verses and colorful pictures, Santa auditions a variety of animals, birds, and even a reptile; each failure leads him to another creature, until he inevitably ends up with reindeer at the front of his sleigh.

The book came about from an impulse. Bill had recently stepped back from full-time work as a commercial artist and was looking for new challenges when his son-in-law, Craig, suggested they collaborate on a children’s book. Bill was widely known for his humorous drawing style and his ability to bring advertising characters to whimsical life. Along with being one of the primary illustrators of the famed Hamm’s Bear character for Minnesota brewer, Hamm’s Beer, Bill had drawn a variety of advertising characters – “critters,” as they’re known in the business – over his 50-year career.

“A book involving Santa Claus and a variety of animals seemed like the ideal subject to play to Bill’s strengths,” Craig said. “He could bring the same kind of personality and humorous situations to our animals that he’d brought to characters like the Hamm’s Bear, the Green Giant, and the University of Minnesota Gopher.”

Before the Reindeer is available as a 24-page softcover. Book preview and ordering information here.