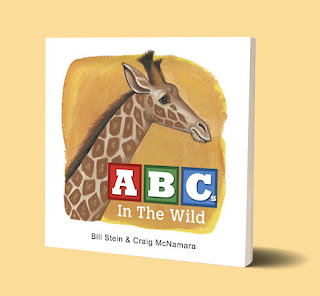 For thirty years, Bill Stein put the Hamm’s Bear in endless antics amid north woods lakes and pine trees. Though he wasn’t the creator or the sole artist illustrating the Bear, from 1956 to 1986, he drew the lovable, bumbling Bear more than any other artist.

But recently, he turned his attention and talent to animals who live the world over.

“ABCs in the Wild” is a new children’s alphabet book illustrated by Bill and written by Minneapolis writer (and Bill’s son-in-law), Craig McNamara. Colorful painted illustrations and lively verses bring the alphabet to life and help instill a sense of wonder at the variety of animals found in nature.

The book came after Bill had stepped back from full-time work as a commercial artist and was looking for new challenges. His son-in-law, Craig, suggested they collaborate on a children’s book. A few weeks later, Craig dropped by and Bill handed him 26 sketches of animals, birds and one amphibian. “Start rhyming,” Bill said.

As Craig researched the animals to guide the light-hearted verses, Bill began work on the final art. “If you’re only familiar with Bill’s whimsical drawings of the Hamm’s Bear, you’re going to be surprised by his lush, naturalistic paintings of animals in mountains, deserts, and plains,” Craig said. “And yet, every animal’s face has its own personality.”

“Animals have a way of endearing themselves to people, whether they’re wild or tame,” Bill added. “One of the fun things in drawing them is getting the expressions of their face...this is how you let people know how they feel about what’s going on around him.

“ABCs in the Wild” is available as a 24-page softcover. Book preview and ordering information here.