February 12, 2009
Those who decry the encroachment of advertising on public spaces (and public surfaces), may have been particularly disheartened when this commercial began appearing last March:

Rolling Rock Moonvertising: Launch - Watch more Funny Videos
Not to worry, though.  This time, it was all a gag -- unlike, sadly, the selling of naming rights of stadiums.  However, as the New York Times later pointed out, "moonvertising" wasn't as far-fetched as it seemed:

According to Jim Garvin, the chief scientist at NASA’s Goddard Space Flight Center, moonvertising is possible, if impractical for a number of reasons. While scientists have bounced lasers off the moon, they illuminated an area only about the size of a tennis court. “In order for an advertisement to be seen by people on earth,” Garvin says, “the laser light would need to cover an area about half the land size of Africa,” a challenge because the moon’s surface is dark and fairly nonreflective.

So, all things considered, this 1989 ad may still be state-of-the-art in "geographic messaging":

Anyway, Superman did the moonvertising first, way back in 1962.  And with a far more altruistic message: 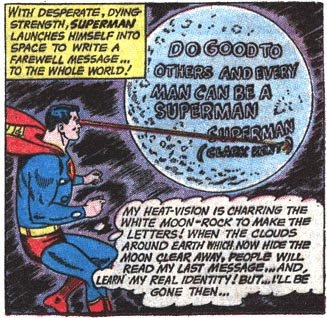