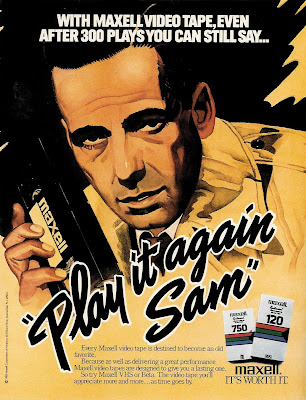 Am I being too harsh on Maxell? After all, they're just having a little fun with an iconic movie and quote from Humphrey Bogart, right?
Actually, it doesn't matter how many times you play that Maxell tape -- you're never going to hear Bogie say "Play it again, Sam," not even once. From Wikipedia:

One of the lines most closely associated with the film ["Casablanca"] — "Play it again, Sam" — is a misquotation. When Ilsa first enters the Café Americain, she spots Sam and asks him to "Play it once, Sam, for old times' sake." When he feigns ignorance, she responds, "Play it, Sam. Play 'As Time Goes By'." Later that night, alone with Sam, Rick says, "You played it for her and you can play it for me," and "If she can stand it, I can! Play it!"

Did the ad's writer know that? Or would he or she just claim, (a la Bogart's Rick Blaine), "I was misinformed."