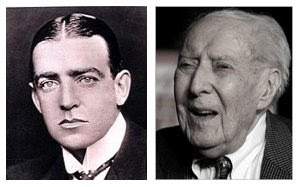 Talk about painting a bleak picture.  But you may be surprised to discover that, when that ad ran in 1900, arctic explorer Shackleton found himself inundated with replies.  "Isn't the sheer strength of that advertisement, then, in its simplicity?  Isn't its sheer power in its honesty?" the copy further proposes (leading of course, to an endorsement of the agency's own advertising principles).
I thought back to Shackleton's ad this week when I read the New York Times obit for venerated comedy writer Irving Brecher.  His career began in the early 1930s, when, as a 19-year-old movie theatre usher, he learned from a critic for Variety that it was possible to make money writing jokes for comedians.

Knowing of Milton Berle’s reputation as joke-pilferer, he placed an ad in Variety, reading, in part: “Positively Berle-proof gags. So bad not even Milton will steal them.”

Berle himself hired him.

Perhaps Brecher was more self-deprecating than honest, but, like Shackleton, he seemed to instinctively realize that how it wasn't hyperbole that would attract the people he wanted, but candor.
ad agencies Ads Copywriting Creativity