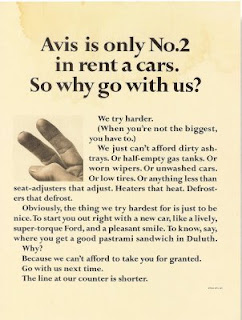 In  "A book about the classic Avis advertising campaign of the 60s," (yes, that's really the title), the author details not only the beginnings of the "When you're #2, you try harder" Avis philosophy (first presented in the ad at left),  but also its decline.
As a competitive strategy, it probably seemed bulletproof to some; after all, when you're not challenging the market leader for the #1 position, how much of a response should they really make?  Conventional marketing wisdom says that when you dominate the marketplace as Hertz did, acknowledging the competition only enhances their status.
And for over four years, Avis used their ads to both raise their image and indirectly undermine the perceptions of Hertz (never even mentioning Hertz by name), without a real counterattack. 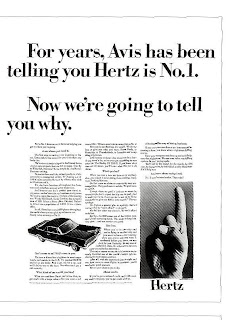 That, however, changed in 1967, when Hertz switched agencies to Carl Alley, Inc., a shop as revered for its creative approach to advertising as Avis' agency, Doyle Dane Bernbach.  To stop Avis' slow erosion of its market share, Hertz began an aggressive campaign that turned its rival's #2 claim back on them, with ads like the one at right.
When DDB head Bill Bernbach saw the first of these new Hertz newspaper ads, he reportedly threw down the New York Times in anger, saying, "As of today, they are alive and we are not.  They are alive and we just died."  And indeed, the Avis "We Try Harder" campaign was fatally wounded; it limped along for a while longer, but was replaced by more conventional messages in 1968.
I'm couldn't help thinking about all this in the context of the Apple-PC rivalry.  For several years now, Apple has taken shots at its much larger competitor with its popular "I'm an Apple/I'm a PC" series of TV commercials.  Though the spots highlight actual advantages of the Apple computers, its true appeal has always been in its depiction of the Apple as a young, creative individual as opposed to the PC avatar, a paunchy, middle-aged Organization Man (who also, not coincidentally I'm sure, brings to mind Microsoft's Bill Gates):

Much like Hertz, Microsoft had refused to directly engage the upstart Apple -- until recently, when they finally responded (after some amusing but quite pointless spots with Jerry Seinfeld) with a series of commercials that both reinforces the ubiquity of the PC, but more importantly, rehabilitates its image by forcefully rejecting the stereotype pushed by Apple:

Is it working? Apple seems to be continuing with their spots, but will Bill Bernbach's assertion -- "As of today, they are alive and we are dead." -- ultimately apply to Apple's campaign as well?
(NOTE: With this entry, Deconstruction On Madison Avenue resumes publishing -- albeit on a bit more irregular schedule. Thanks for coming back.)
ad agencies Commercials creative people Creativity