August 28, 2009
Probably seemed like a slam-dunk to the creative team. Resurrect a popular countercultural celebrity, put her in close proximity to the product and let the amused double-takes begin: 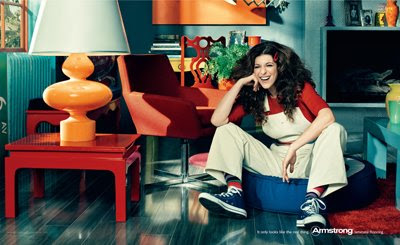 So how come so many people seemed a bit put-off by the faux-Gilda Radner ad in Armstrong's It Only Looks Like The Real Thing campaign.
It's not the clumsy wording, which seems to refer to a beloved entertainer as an "it;" there's something more going on here, a reaction unprovoked by their other ads which paired laminated flooring with celebrity impersonators like Lucille Ball and James Dean: 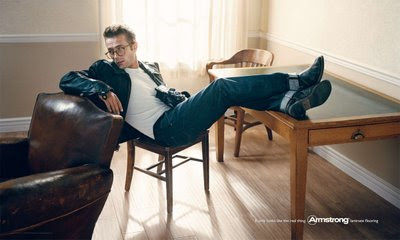 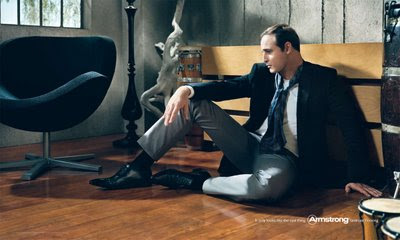 Then, probably because the client realized that they'd fallen into a rut using SpokesImpersonators stuck in the 1950s, at attempt was made the "freshen" the campaign with a more modern icon -- at least as modern as a late-1970s icon could be.
Gilda Radner (of Saturday Night Live's original cast, for those who don't know) probably came to mind as a complement to Lucy's anarchic spirit. (Interestingly, the men seem all chosen for their "cool"demeanor; the women for their screwball personnas.) And everyone loved Gilda, right?
Yet, if you Google "Armstrong ad, Gilda Radner," you'll see that this ad garnered reactions both strongly negative and vaguely uncomfortable; in fact, more than one woman I spoke to about the ad seemed a bit put-off by the use of someone who died so tragically from cancer.
But then, James Dean died in a near-head-on car crash, and Brando, though he lived to be 80, had a chaotic life marked by personal tragedies; yet nobody seems worked up about their inclusion in this campaign. So it's doubtful that it's just the circumstances of Gilda's death. (And it can't really be because her death is relatively recent. It's been more than 20 years since she passed away. )
So what is it then, really? What makes Gilda Radner so untouchable for commercial purposes? The reality is that everything -- every icon -- is for sale these days. If you doubt that, check the ad's fine print that states "Likeness and rights of Gilda Radner licensed through the Gilda Radner estate."
Here's what I think: Gilda is more of a "pure" Baby Boomer icon (being a Boomer herself) than Dean, Brando, et al, and despite even the Beatles now licensing their images for commercial purposes, deep down in our little narcissistic hearts, Boomers still want to believe that some of their seminal entertainers and cultural memories are still off-limits to advertising. The more jaded we become, the more desperately we want to believe that some beloved icons are just too cherished to be shoved into posthumous pseudo-endorsements.
Just like our parents probably believed...before we we shoved their beloved icons into posthumous pseudo-endorsement like, oh, Fred Astaire selling Dirt Devil vacuums: