June 03, 2008
We referenced this ad campaign in an earlier post, but it really deserves its own entry. 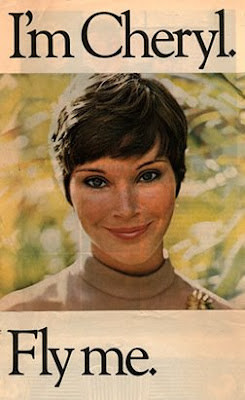 This memorable/notorious American Airlines campaign appeared back in 1971, at the behest of National Airlines' Lewis Maytag who sought to modernize the airline and the image of its stewardesses.  (Yes, they were still known as stewardesses back then.)

At the time, airline advertising had frequently based their messages on the friendliness and attentiveness of their stewardesses, but previous efforts tended more toward the chauvinistic end of sexism spectrum, treating them more like Ladies Of The Air than ladies of the night: 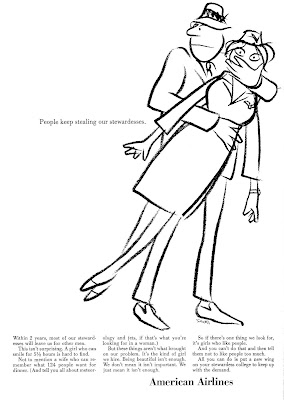 (Despite the caveman ethos of the headline and illustration, if you click on the ad to enlarge it and read the copy, you'll see it's actually about men being so beguiled by their stewardesses that they often took them for wives -- after first mistaking wives for servants, I suppose.)

But now, with the sexual revolution and women's liberation in full swing (and the swinging lifestyle in full swing, too), and probably influenced by the 1967 international best-seller, Coffee, Tea or Me?  The Uninhibited Memoirs of Two Airline Stewardesses, Maytag and its ad agency decided to tie into the new image of stewardesses as free-spirited, sexually adventurous women that was taking hold in our culture.
Braniff may have touched on it first, with its own cheeky 1965 commercial featuring a stripping stewardess, but it was National that really brought the innuendo front and center:
Other ads invited you to Fly Suzie and Fly Lorraine. The ladies' names were also painted on the noses of the airplanes, in a bid for synergy and probably, plausible deniability over the suggestiveness of the phrasing. 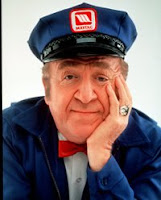 (By the way, Lewis Maytag is from that Maytag family; he skipped the family business and bought a controlling interest in National instead. Maybe that whole "Loneliest Guy In Town" thing helped inspire the Fantasy Girl come-ons of the "Fly Me" campaign.)
At any rate, the ads increased sales at National by 23% in the first year alone, inspired this 1973 quickie movie (pardon the pun) and of course raised the ire of feminists.  In its obituary for the ad man behind the campaign, F. William Free, the New York Times reported that when the National Organization of Women demonstrated outside his agency, he tried to quell their anger by presenting them with bouquets of roses. (Why didn't he just offer to marry them?)
But were the stewardesses as offended by the ads?  Some refused to the wear their mandated "Fly Me" button, but at least one of the ad's subjects was flattered by the attention, as she relates in a podcast here (Her interview starts about halfway through).
Three years later, National upped the ante with an updated campaign theme, "I'm going to fly you like you've never been flown before."  According to a 1974 article in Time, the actresses were coached to "say it like you're standing there stark naked."
The randy fun all ended in 1980, when National merged with Pan Am.  But not before being lampooned by this clever ad in 1977: 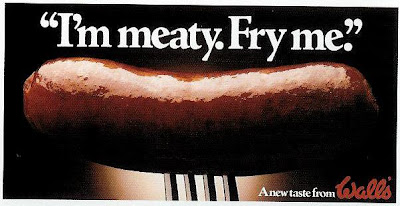 Anonymous said…
I always imagined the American Airlines ad being based on a truism. That many businessmen did actually meet their wives on planes. The Walls poster was written by the man who created the ‘refreshes the parts that other beers cannot reach’ campaign line for Heineken, Terry Lovelock. At the same time, there was a song by 10CC called ‘I’m Mandy, Fly me’ which was a top 10 hit in the UK so the poster gained extra relevance that way.
June 4, 2008 at 7:09 AM

Craig McNamara said…
I think you're right that the American Airlines ad is based on the reality that businessmen often did take stewardesses for their wives. I guess it just points out the romantic version of chauvinism we had back then. (Kind of like Cinderella at 30,000 feet.) I do think it's odd to pair that idea though, with a kidnapping illustration (even a humorous one).

Thanks for the info on the "Mandy" song; I stumbled on that while researching this the other day, but forgot to include it.
June 4, 2008 at 9:59 AM

Anonymous said…
Dick Wolf actually worked on this campaign before the Law & Order series, one of his most known and controversial work. Just an FYI.
November 10, 2008 at 10:35 AM