February 14, 2011
Yes, hard liquor is most respectably consumed in the evening hours, but is there something more behind this 1972 Smirnoff ad's imploring headline? 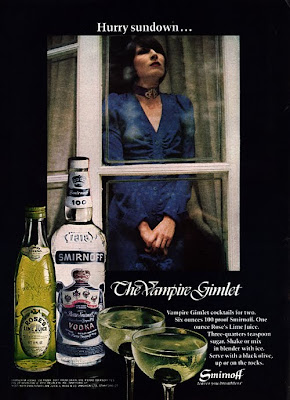 Is it a reference to the 1967 racially charged drama, "Hurry Sundown"? Or perhaps the spiritual made popular by folkies Peter, Paul and Mary in 1966? 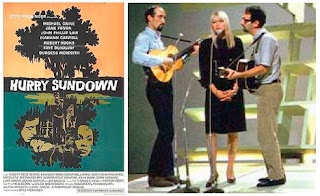 Actually, I'm guessing it's neither, and instead was just a clever intro into the ad's recipe for the "Vampire Gimlet," so dubbed, I suppose, for its eerie green hue and black olive.
But that raises a new question, doesn't it? Why a vampire? This was, after all, decades before the romantic vampire imagery of '80s and '90s cinema and television. In fact,
Ah, but the clue is in the ad's photo, the modern-but-still-vaguely-gothic appearance of the woman in the window.
The drink, as well as the ad, seems calculated to appeal to the youth-adult audience that had helped catapult this unique ABC soap opera -- and its vampiric leading man, Barnabus Collins, to popularity in the years between 1966 and 1971: 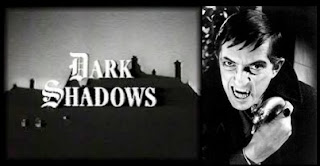 Yes, by mid-1971, the Dark Shadows phenomenon had waned to the point where it succumbed to the stake of cancellation, but by then, it had so deeply sunk its teeth into the vein of pop culture that -- well, you see what I'm getting at....
Icons Pop Culture The '60s TV

Anonymous said…
An important marker in the late 60's Vampire vein was Roman Polanski's Fearless Vampire Killers of 1967 (or pardon me, but your teeth are in my neck)
-DetroitMac
March 4, 2011 at 4:30 PM