The (near) naked truth

March 07, 2011
You combine with the loosening sexual mores of 1972 with the mainstreaming of the "male centerfold" (following movie star/sex symbol Burt Reynolds appearing au natural in Cosmopolitan that same year) and this -- unfortunately -- is what you get: 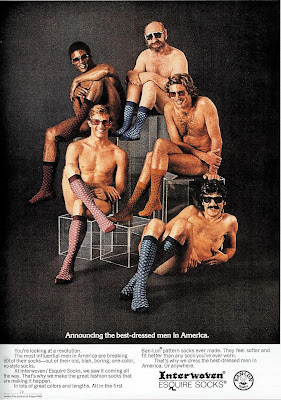 Real socks appeal, fellas.
Yes, what better way to show off your socks than by removing all those other distracting clothes? Or, more to the point, what better way to draw attention to your ad than by highlighting it in context of one of the most provocative images allowed in mainstream media of the era? (Showing women nude or with implied nudity had been fairly common in advertising since at least the '50s.)
But back to the Cosmo influence: After some 80 years as a family magazine, then-new editor Helen Gurley Brown reoriented the magazine in the early 1970s, to a focus on the interests of sexually liberated young women. 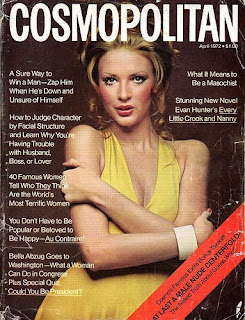 Women finally get equal rights to
objectify the opposite sex.
Probably nothing epitomized the magazine's change -- and cemented its image for outspokenness and sexually charged content -- than its appropriation of that longtime staple (sort-of pun intended) for young men, the Playboy centerfold.

(You can go find the whole image elsewhere on the web, but thanks
to Burt's carefully placed left hand, you still won't see everything...)
It was controversial at the time, but using the decade's biggest movie star (and roguish "bad boy") probably softened the outrage, and helped pave the way for Playgirl a year later: 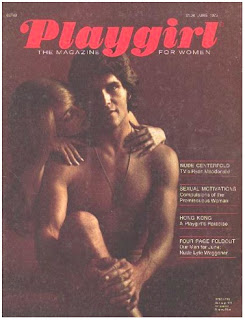 At least, it was intended as a magazine for women...
Despite its reputation, advertising has always been less of a leader in cultural change than at best, an early adapter of trends. So when the male nudity made its first tentative exposure in advertising, it was more satirical and -- well, neutered -- than the outright sensuality of the Cosmo/Playgirl offerings: 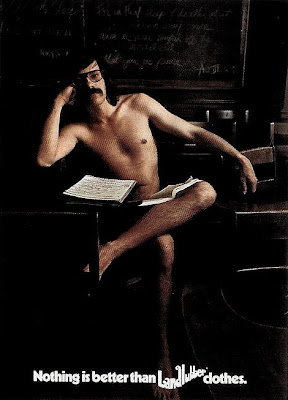 This studious fellow actually preceded the
Cosmo centerfold by a year.
By the end of the '70s, the Interwoven campaign was still running, although thankfully, male hairstyles, preferences for facial hair and tinted eyewear, and even sock patterns had improved. 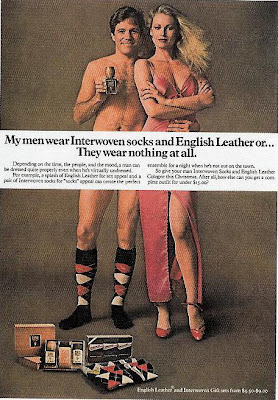 This woman needs to rethink her priorities.
In next decade, unabashed male sensuality in advertising would finally be on full display -- ironically, the men would actually be wearing more (okay, slightly more) clothes: 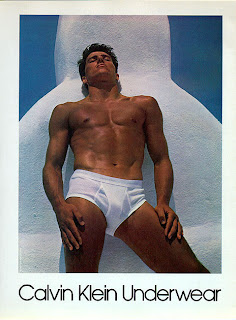 And this will be one of the tamer Calvin Klein ads
we'll be subjected to over the coming decades.
Ads Celebrities Pop Culture The '70s The '80s