My years in college coincided with the comedy boom of the early 1980s.  Back then, every kid who was a former class clown, or used laughter to deflect their insecurities, thought about spinning their jokes into gold. And I was one of them (the insecure ones).

Spurred on by the then-revolutionary countercultural satire of Saturday Night Live and the rise of comedy clubs and the stars they nurtured (Steve Martin, Rosanne Barr, Sam Kinison, Robin Williams, et al); suddenly every two-bit bar with a brick wall was laying a sheet of plywood over a base of plastic milk crates and hosting “standup nights.”

One of the first venues in Minneapolis to feature standups was Mickey Finn’s (now The Union), a dive bar in Northeast Minneapolis, probably best remembered (if at all) as the stage where Louie Anderson got started.

Eventually, the ubiquity of standup comedy (thanks, cable TV!) and way too many “open mike” comedy nights and their cattle calls of uncomfortably unfunny would-be comics killed the boom, at least on the local level.

But in 1980, that was yet to come. What we did have then were bar-sponsored comedy competitions that I would see advertised in my college newspaper, the Minnesota Daily. I toyed with entering one of them, but never seriously pursued the spotlight. The most I accomplished was writing a few one-liners that probably would have killed on the optometrist-and-barber circuit:

I’m so near-sighted, I have to drink out of prescription glasses.

I’m not losing my hair. But I think my comb is.

There were a few more, but mercifully, I’ve long since forgotten them. Still, having become aware that all comedians did not, in fact, write all their own jokes, I saw another opportunity. And I knew just the comedian to approach.

By the late 1970s, Rodney Dangerfield was at the peak of his popularity. Bug-eyed, rumpled, twitchy and forever pulling at his tie, Rodney has built a career out of self-deprecating one-liners. (Typical joke: “My psychiatrist said I was crazy. I said I want a second opinion. He said, 'Okay, you’re ugly too.'”) 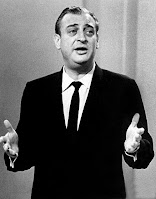 An audience favorite from his frequent appearances on variety shows and “The Tonight Show with Johnny Carson,” Rodney had the persona of an everyman for whom nothing ever goes right. Realizing that his routines had a simple structure – non-sequiturs usually set up by his catch-phrase, “I don’t get no respect,” or “My neighborhood is so tough that ...” – I put my developing comic mind to work to see what I could come up with.

I think I wrote about eight to ten jokes. I no longer have a copy, but here the ones I remember:

I don’t get no respect. A blind guy refused to touch my face.

I come from a tough neighborhood. It’s so tough that when babies are born, they slap the doctors back.

I think my wife is having an affair. I went in the bathroom and saw the towels are marked His and Hers … and His. (I still like this one.)

Now, how to get these comedic gems in front of Rodney? I had that figured out, too. I knew from his “Tonight Show” introductions, that Rodney owned a club in Manhattan, not surprisingly called “Dangerfield’s.” By searching through a New York phone book in the University library, I found the club’s address and used it to send off my jokes to Rodney.

(I realize now that Rodney was most likely not involved in the day-to-day operations of the club. On the other hand, I probably wasn’t the first wannabe joke-writer who thought Rodney could be reached at that address.)

For a few weeks, I imagined a scenario wherein I heard back that Rodney loved my jokes, would be using them in his next “Tonight Show” appearances – oh, and here’s a check for $100 (or whatever the going rate was for one-liners.)

Eventually, probably about the time I stopping anticipating it, an envelope from “Dangerfield’s” showed up in the mailbox. Inside was … alas, not a check, but a letter back from Rodney’s manager, probably some variation on a letter he would send out in response to most unsolicited jokes.

The manager thanked me but said that, although Rodney does buy jokes, he has very high standards. But to soften the rejection (and probably to head off any potential accusations of theft) notes that some of my jokes are similar to ones Rodney’s already using (something about a blind man reading the pimples on his face), so “I’m on the right track.”

At the time, I found that somewhat encouraging. Now I would have preferred outright rejection – that way, I could quip that, as a joke-writer for Rodney, “I got no respect.”