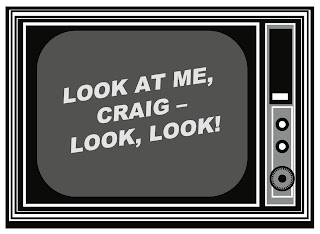 I’ve been known to sum up my past co-dependent relationship with television by telling others that my parents used to say, “It’s such a nice day, Craig – why don’t you take the TV outdoors?”

Yes, I’m exaggerating – but only a little. I freely admit, I watched way too much TV growing up. Given that, you might think our modern era of “Peak TV, with streaming services multiplying like rabbits on Spanish Fly, would be a dream come true for me, right?

Let’s press pause and think about that for a second.

Now, don’t get me wrong, I’m all for the freedom to consume entertainment programs on my own schedule without having to wait a week between installments or broken up by commercials. And I won’t argue the point that we’re in a Second Golden Age of Television, with more shows than ever before of high quality, diverse subject matter, and involving storytelling – The Sopranos, Mad Men, Breaking Bad, Game of Thrones, et al.

But here’s the thing: If you’ve ever owned a dog, then you know about the lack of self-control they have when it comes to food. In fact, one of the worst things that can happen is if your dog somehow gets into your 40-pound bag of dog food – that’s because dogs are known to keep eating and eating and won’t stop until they get sick.

Similarly, now that most shows are being structured as 10- to 13-part stories and available all at once, the temptation for me, like many other people, is that once the viewing starts, it’s hard to stop. Every episode is designed to leave you ready to start up the next one. (Actually, you don’t even have to want to start the next episode – it’ll begin automatically before the end credits even finish.)

But for me, I’ve noticed that, about halfway through a season, I inevitably start to get a little antsy. Not that I’m necessarily no longer enjoying whatever series I’m watching – but it starts to feel more like an obligation than a diversion. I find that I'm already looking ahead to when that season’s done and I can cross it off my mental viewing list. It’s like I’m down to the last miles before the end of a long car trip and I can’t wait to finally arrive at the destination.

Which is why, when I finish a season, I like take a little break before launching into the next one. I have the urge to step back and even step outside, to remember what it was like back when people used to say to me, “You watch a lot of TV,” instead of “Why aren’t you watching that show?”

How did so-called “Appointment TV” become “Assignment TV”? How did I get from “Must-See TV” to feeling like “must-flee TV”?

And why, in a culture of “binge viewing,” do I insist on “binge-and-purge” viewing?
Culture Entertainment Pop Culture TV