What's really behind the smoke?

January 16, 2011
Here's an early-1970s ad that seems to have sparked a lot of "outrageously outrageous outrage" on some sites around the web: 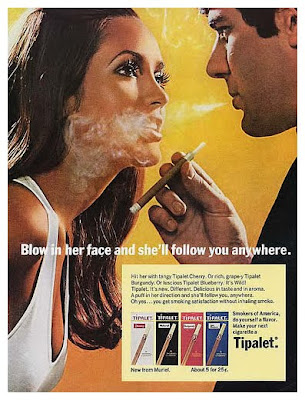 "It's rude/it's sexist/it's unhealthy" goes the shocked, shocked criticism of this ad -- which, seen in the context of the times, seems as about as pointless as sneering at it for its pro-smoking advocacy.
What I found interesting was reference point for the headline. "Blow in her face and she'll follow you anywhere" wasn't just referring to the fruit-flavored tobacco (which, the ad presumes, she'll find aromatic). It's a paraphrasing of a catchy come-on -- "Blow in my ear and I'll follow you anywhere" -- that was popularized by 1969's and 1970's #1 TV show, "Laugh-In." Used as both a pickup line and a punchline, I seem to recall even Dick Martin using it in his routines with partner Dan Rowan. 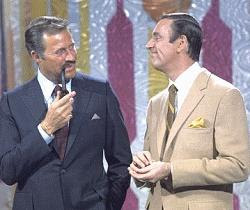 Finally, before we leave this Tipalet ad behind, in its defense, may I point out that the man in question isn't really blowing the smoke directly into the woman's face, but more considerately, slightly to her left (towards her ear actually, bringing it back to the original phrase). Anyway, I think the woman may have a greater worry about where that cigarette ash lands when it finally breaks off.
Cigarette Ads Culture Pop Culture The '70s TV

Paul said…
"blow it in your face and she'll follow everywhere". LOL They'll be saying that for smokeless cigarettes pretty soon.
March 26, 2012 at 2:01 PM