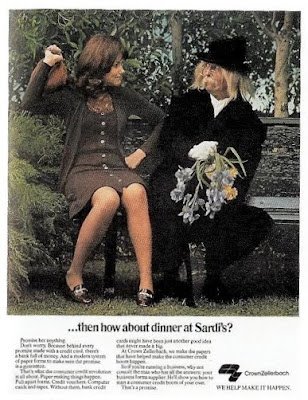 "Promise her anything," the ad begins, assuring the reader that "behind every promise made with a credit card...there's a modern system of paper forms to make sure the promise is a guarantee." (This is pre-analog and pre-digital transmission of data.) All well and good, I suppose, but what, you're wondering, is the point with the photo and headline?
Actually, if you were watching TV back in the early '70s, you already know what the point is. The photo is a clumsily staged knock-off of a popular "Laugh-In" skit featuring series regulars Ruth Buzzi and Arte Johnson: 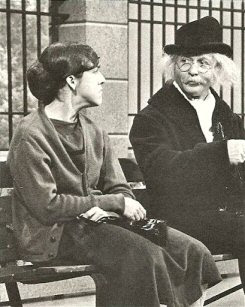 Here's how Wikipedia explains it:

...dowdy spinster Gladys Ormphby, clad in drab brown with her bun hairdo covered by a visible hairnet knotted in the middle of her forehead. In most sketches, she used her lethal purse, with which she would flail away vigorously at anyone who incurred her wrath. On Laugh-In, Gladys most often appeared as the unwilling object of the advances of Arte Johnson's "dirty old man" character Tyrone F. Horneigh.
In a typical exchange, Tyrone accosts Gladys and asks, "Do you believe in the hereafter?" "Of course I do!", Gladys retorts defensively. Delighted, Tyrone shoots back: "Then you know what I'm here after!"

(This is actually the second ad from the era we've found that seems to trade on Ms. Buzzi's Gladys character; here's the other.)
That mystery solved, here are two others: I don't know why the woman above, who may or may not be actress Stockard Channing, has replaced Gladys. And I'm a little fuzzy on the headline, except to speculate that it's meant to sound like one of Tyrone's leering come-ons; maybe it was a recurring phrase he used.
And if you're thinking that this is all an awfully round-about way of getting to selling paper forms, I think you're right.
Celebrities Entertainment Pop Culture The '70s TV