Embracing (but not squeezing) Mr. Whipple

September 19, 2011
"It was that easy.
In an hour and a half,
America's most universally
despised advertising
campaign was created."
That's how Benton & Bowles writer John Chervokas described the process of creating Mr. Whipple and the "Please Don't Squeeze the Charmin!" ad campaign in 1964. Mr. Chervokas died not too long ago, leaving as his legacy an ad campaign that was rated by Advertising Age as the 51st best campaign of the last century.
By 1978, Mr. Whipple was named the third-best-known American—just behind former President Nixon and Billy Graham. “Please don’t squeeze the Charmin!” became one of most recognizable advertising slogans ever, identified by eight out of 10 people that same year. 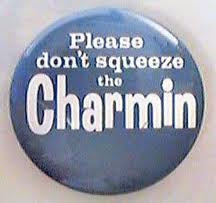 And yet, far from celebrating Mr. Whipple, the advertising community frequently derided Mr. Chervokas' brainchild as emblematic of the crass, lowest-common denominator pandering for which the industry was often denounced. (And judging by the title of a popular manual on copywriting, that animosity has yet to dissipate.)
(Never mind that the Mr. Whipple commercials first started running in an era when programming they would interrupt included such high-brow fare as "My Favorite Martian," "The Munsters," and "Gilligan's Island.")
Yes, Mr. Whipple (no first name ever given) was a bizarre character, even among company that included a nosy Mrs. Olson who kept showing up uninvited at people houses, coffee crystals in hand, and a too-chummy fellow who live on the other side of the bathroom cabinet and always wanted to share deodorant. Still, there was something...repressed...about Mr. Whipple, who, after scolding shoppers for squeezing the Charmin... 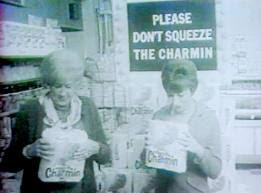 ...would inevitably be caught compressing the toilet tissue himself; guiltily, compulsively, like a pervert caught in the act. 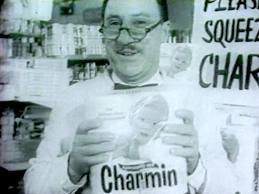 Still, he sold a lot of toilet tissue.
In a 1972 essay in Advertising Age, Mr. Chervokas gave his account of the birth (and subsequent vilification) of Mr. Whipple. It's fascinating, both as look into the creative process that goes on everyday in advertising, along with the maneuvering to define a selling proposition based on the slimmest of attributes.
Charmin bathroom tissue had been around since 1928 (named by an employee of the original manufacturer who described the product as "charming") and during the intervening 36 years, had found success with ad campaigns that were based on an elegant, feminine appeal ("Lady Charmin") and later, with baby imagery to symbolize the products gentleness (“Charmin Babies Your Skin”). 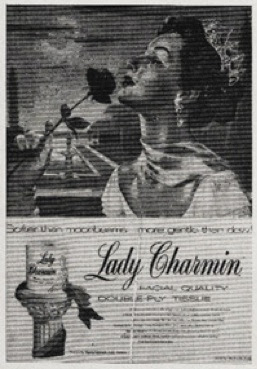 So, gentleness was out. Softness was in.
Here, Mr. Chervokas gives us a takes us into their brainstorming:

...how about a funny demonstration of softness? Just what are the standards of softness?
Soft as a feather? No, it makes you think of tickling.
Soft as a baby's behind? Not bad, but too restrictive.
Soft as silk. Overpromise.

Then comes the quite-logical question that leads to new imagery:

Now how do you go about measuring something like softness?
Fall on a pillow.
Hug a pillow.
Squeeze a...
Squeeze a what?

That question leads to the germ of the big idea:

...what does mom do in the supermarket?
She squeezes the melons. And the tomatoes. And the bread.
To see if they're soft.
Then... Then... Why not use the same test for Charmin?

Boom! Squeeze the Charmin. Sheer genius. Or is it?

Supermarket managers will flip their corks.

An obvious problem. You can't be encouraging consumers to damage the merchandise. Which leads to the true brilliance of the concept, the insight that got around the issue and more importantly, gave the campaign a stickiness that lasted for the next 20 years and beyond:

Okay, then, let's tell them not to squeeze the Charmin. 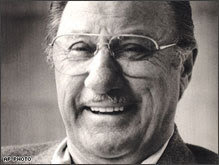