November 08, 2009
The wording is a bit confusing (is Dad talking about himself?), but that's the least of the curiosities in this 1969 ad for Oneida: 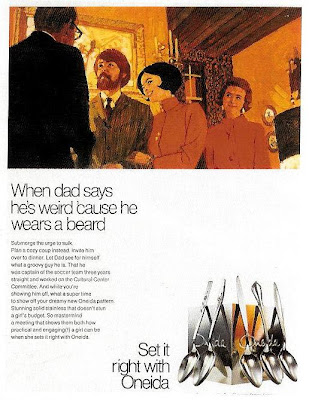 Once again, Madison Avenue attempts to engage the counterculture, with the awkwardness typical of the time. Here, the beau with the neatly trimmed beard seems neither beatnik nor hippie. In fact, his facial hair seems almost professorial; it's the Beatlesque mop atop his head that would seem more likely to raise Dad's hackles.
But while the copy insists "what a groovy guy he is," the kid seems more like a budding member of The Establishment than a Timothy Leary devotee, considering

That he was captain of the soccer team for three years straight and worked on the Cultural Center Committee.

So in the end, it's not a plea for understanding of the younger generation, it's just another reinforcement of the values of the older generation, dressed up in a "can't judge a book by its cover" homily.
And if Dad is such a traditionalist that he was put off by young men who didn't shave, you can imagine how he felt about seeing a young woman who did, four years earlier: 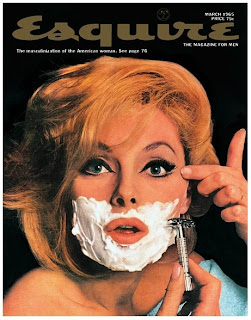