The few. The proud. The mistresses.

November 20, 2009
I had no idea that being somebody's mistress was so demanding. I thought you just had to put up with sporadic, last-minute trysts and holidays and birthdays spent alone. But apparently, you've got to have a passion for Fibber McGee and own an ocelot, among other things.
This whole 1974 ad bears reading. I guess its somebody's idealized image of a mistress, but even with tongue-in-cheek (I assume), the insecurity and cruelty of the situation for women is perhaps unintentionally touched on with the line about her "seeing a psychiatrist by your giggling at her striptease." It's almost like a "scared straight" thing for The Other Woman. Click on it to enlarge: 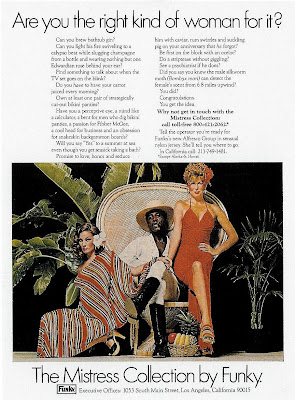