Art appreciation (from an unlikely source)

August 23, 2010
Abstract expressionism has all too frequently been the butt of jokes in popular culture. Garnering only a portion of the respect it holds in the art world, abstract works have inspired endless "my kid could've painted that for free" quips in television and movies -- and in all likihood, advertising as well.
But not here: 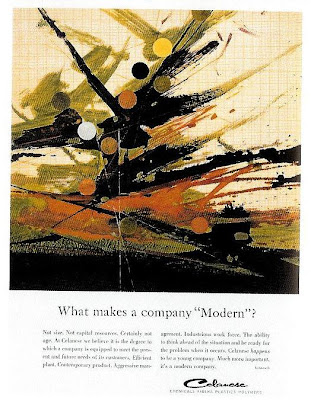 This 1963 ad from the chemical manufacturer Celanese isn't interested in the typical "it looks like the artist exploded" style of one-liners. Instead, they use an example of abstract expressionism to symbolize "modernism" and it would appear that their intentions are straightforward. Any suggestion that the art style was less than legitimate would undermine the ad's entire argument.
"Celanese happens to be a young company. Much more important, it's a modern company." the ad assures us rather defensively. It seems to be in response to more established competitors (or perhaps less established upstarts); at any rate, by this time, Celanese was nearly 45 years old, hardly the paragon of youth. 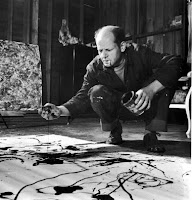 As for the artwork in the ad, it's would seem to be inspired by the work of American painter Jackson Pollock, a major figure in the Abstract Expressionist movement. A pioneer of the "drip" technique using liquid paint on a canvas lying on the floor, Pollack's drip paintings were polarizing to both critics and the public. But thanks to a glowing profile in a 1949 Life Magazine, his were probably the best known examples of the controversial post-World War II art movement. Obviously the designer of the ad above was an admirer of Pollack's work.
Here's a couple of Pollack actual drip paintings. See how easily they could be substituted in the ad above: 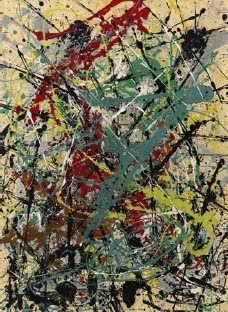 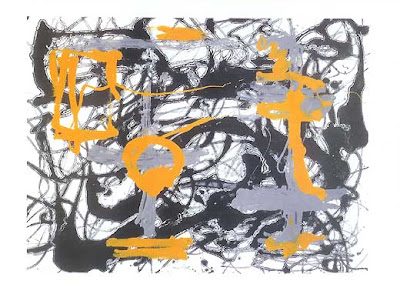