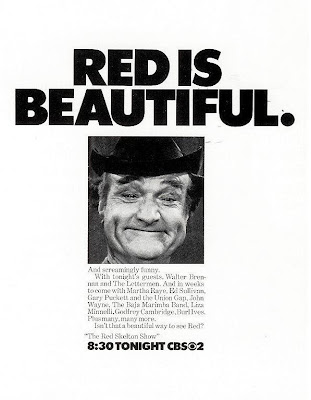 Hmm. Odd bit of hyperbole there. At the height of his popularity, the comedian Red Skelton could be described as clever...a gifted mime...or even, as the ad says, "screamingly funny" (I said he could be, I didn't say everyone would agree)...but beautiful?

Actually, it makes a bit more sense when you consider the era in which the ad was created and ran. "Black is Beautiful" was the theme if you will, of the late 1960s U.S. cultural movement that countered traditional "Caucasian-centric" views of desirability, and the phrase was on was more likely to come up on the news or talk shows than in entertainment programs (such as, not surprisingly, the show in question).
So was CBS being insensitive in the co-opting of the phrase? Maybe, but they weren't the only ones to do it. 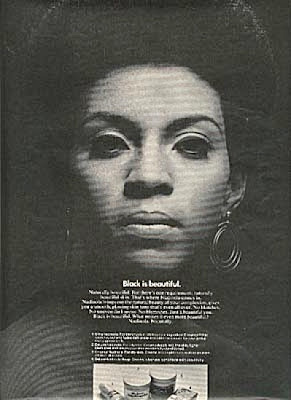 (The above ad, I suppose, at least has the virtue of being sincere about it.)
Ads Pop Culture Slogans The '60s

Paul Duca said…
Clearly this was an effort to give Red more of a "hip" appeal. Not that it helped...RED SKELTON was one of the first programs to be canceled because its audience demographics weren't desirable to advertisers--too old/poor/rural.
November 29, 2010 at 7:28 PM