August 17, 2010
That Maidenform woman... you never know where she's going to turn up. Even in these ads from another clothier entirely... 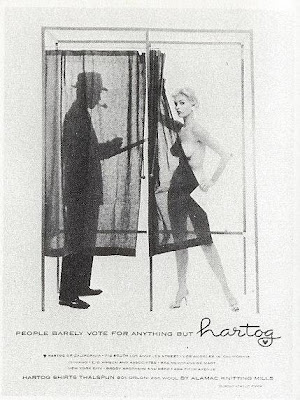 "People barely vote for anything but hartog." or so the headline of this 1957 ad quips. According to this site, Hartog of California was "the leader of cool surfer style in the '60s," but frankly, it's hard to tell from this ad what they specialized in except labored puns about political cynicism and nudity. If you read to the bottom, you'll see the word shirts, but I doubt most readers of the era ever took their eyes off the shapely woman doing the Voting Dance of the Single Veil.
This other ad in the series doesn't make things much clearer, except now the strained attempt at cleverness seems to reference ogling topless ingenues while simultaneously warning against sexually transmitted diseases. 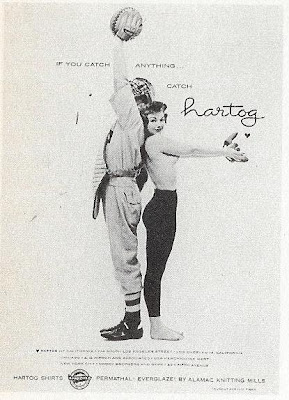 To put it another way, while the models who are showing lots of skin, it's really Hartog who's barely there.
Ads Creativity The 50s