July 16, 2008
Maybe you've seen this classic Guinness poster, created back in the '30s and assumed that it was nothing more than silly hyperbole: 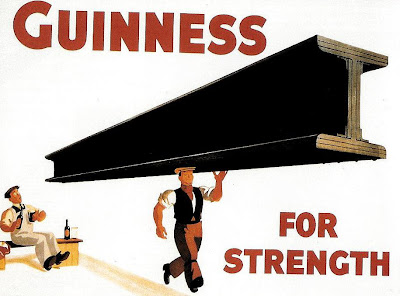 And you'd be partly right. The idea is actually based on the high iron content of Guinness (probably from the water used), though of course, the benefit of this is exaggerated to an unbelievable extent in the poster above. That didn't stop the image from becoming so iconic that a pint Guinness became known as a "girder."

The image also inspired this parody from Heinekin some 40 years later (though its likely that many young drinkers never realized its source), that both fit the idea into its own ad format and made the male sexual subtext even more implicit: 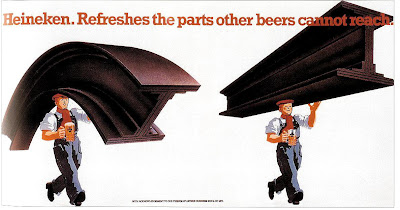 (Best not to take any of this too seriously, though. In reality, the pictures in the Heinken ad would have to be reversed.)
Ads Billboards Copywriting Icons