Me on Minneapolis: a 2002 book excerpt

“How many words on Minneapolis? Twenty-thousand? Sure, no problem.”

One of the most important things I learned during my years as a freelance writer was to never define my scope of work too narrowly. I’d agree to virtually any writing project offered, as long as I could reasonably assume I could do a good job at it. That led to some interesting projects for both ad agencies and clients that went beyond the usual ads, commercials, and marketing materials that were a staple of my business.

Most notably, Twin Cities: Heart of the Lakes, Star of the North, a glossy coffee-table book for the Minneapolis Chamber of Commerce. 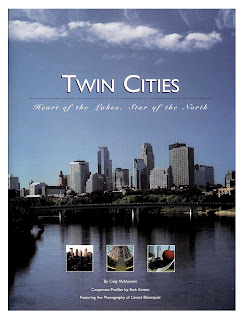 Working with the publisher’s editor, on a tight deadline, I wrote those 20,000 words detailing the history of Minneapolis and St. Paul, the business climate, and the cultural, educational, and recreational opportunities the metro area offers.

My preface connected the task to one of my more vivid childhood memories:

When I was growing up in St. Paul, trips to downtown Minneapolis meant just one thing: another visit to the dentist. I never minded, though, and it wasn’t only because I was getting a day out of school. From the dentist’s chair, I could look directly onto the Foshay Tower across the street.  That view of Minneapolis’s tallest skyscraper made every cavity seem almost worth it, even if I was only seeing the tower’s midsection.

Over the years, I’ve lost none of my fascination for the Foshay, even as taller, showier buildings have sprung up around it. But that fascination, I realize now, was only skin deep. Sure, I loved it for its Washington Monument-style profile and the big block letters at its peak that glowed FOSHAY at night, but there’s more to its significance than that.

I didn’t know, for instance, that Wilbur Foshay was a utilities baron who built the tower for the lavish headquarters of his nation-spanning empire. Or that incredibly, only two months after its gala opening, the stock market crash of 1929 destroyed Foshay’s empire and Foshay himself soon went to prison due to financial improprieties.

Discoveries like that have made working on this book so interesting. I went from a surface knowledge of the Twin Cities to a deeper understanding of the historical, economic and social forces that have shaped, and continue to shape Minneapolis and St. Paul. Whether you’re a lifelong resident or a newcomer, I hope I can bring to light information or a new perspective that fascinates you as well.

Admittedly, many of the chapters that follow are glorified laundry lists of amenities, local institutions, and geography. But my recounting of the historical origins of the cities (chapter 4) came out pretty good. And I liked how the beginning of my introduction allowed me to bring in another skyscraper story that fascinated me:

When the new skyscraper for Norwest Bank (now Wells Fargo Bank) was in the planning stages, it was obvious even then that this would be a tower of grace and grandeur, one of the defining buildings of the Minneapolis skyline. The design by renowned architect Cesar Pelli was a multi-tiered homage to the art deco era of architecture and a striking change from the stodgy, boxy look of the 14-story building that had occupied the site until it was destroyed by fire in 1982.

But perhaps more significantly, it would rise to a height slightly above that of its neighbor to the south, eclipsing the IDS Center’s claim as the Minneapolis’s tallest building. However, by the time construction was completed, the Norwest Center has shrunk to three feet shy of being the new record-holder. Mr. Pelli and bank executives, after additional thought, had decided that that sort of one-upmanship was not in keeping with the spirit of Minneapolis.

Ambitious yet humble. Competitive yet considerate of others. Forward-thinking in so many ways, but always respectful of the traditions of the past. These are the qualities you’ll find in the people, the companies and the institutions that make up Minneapolis today.

And my wrap-up allowed me to pay homage to two icons of my youth in the 1970s:

Above all else, Minneapolis prides itself on being thoroughly cosmopolitan, yet family-oriented as well. It’s probably no coincidence that two of our most famous citizens are Mary Richards, the successful career woman played on TV by Mary Tyler Moore, and Betty Crocker, the consummate homemaker and brand image for General Mills.

Published in 2002, the hard-cover was used primarily to promote the area to prospective companies and residents – but I do recall seeing it displayed on the shelves of Barnes and Noble that fall.

As I said in a self-promotional postcard I later sent out, “Last time I checked their website, it was the 544,176th best seller – but I’m bragging.”

Hmm. Looks like you can still find a used copy on Amazon.