AH and the LBD 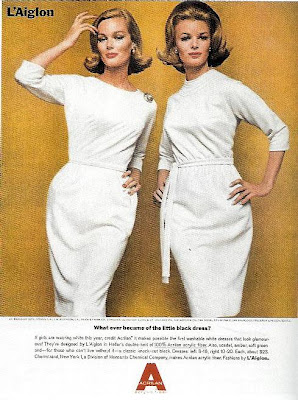 "What ever become of the little black dress?" the headline muses, apparently unaware that it never really went out of style.

The so-called little black dress (also known as LBD), whose simple elegance enables it to be accessorized for both day wear and evening wear, has been a woman's wardrobe essential since it was first popularized in 1926 by Coco Chanel in the pages of Vogue magazine. Its ubiquity continued through the years of the Great Depression and even World War II, and was given new life in the 1960s, most notably by Audrey Hepburn's wearing of the LBD in "Breakfast At Tiffany's"... 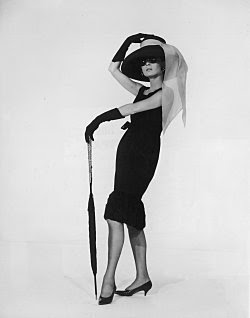 ...a film which, probably not coincidentally, was released the year before the ad above.
Makes you wonder why, if the manufacturer's goal is to expand the acceptance of acrylic fiber, the ad chose to position itself against the little black dress instead of leveraging its popularity to get women to try it in washable acrylic -- although if you read into the copy, it eventually, and grudgingly, mentions you can get the dresses in black, too.