The moon shot heard round the 'world...

December 02, 2010
What's the thinking behind this fanciful ad for True Temper golf clubs? Is it the allure of the moon, pock-marked with craters, as a kind of ready-made planetary golf course? 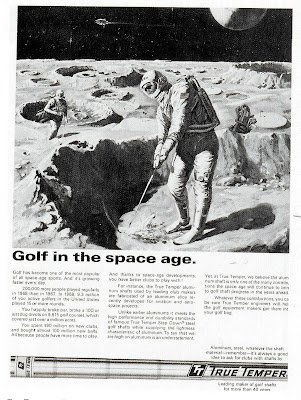 In the second column, the copy makes a more grounded connection:

...the True Temper aluminum shafts, used by the leading club makers, are fabricated of an aluminum alloy recently developed for aviation and aerospace projects.

But wait. Did I call this ad fanciful? Apollo 14 astronaut Alan Shepard, walking on the moon, actually did swing a club at two golf balls. Talking by radio to NASA at the time, Shepard said, "you might recognize what I have in my hand as the handle for the contingency sample return; it just so happens to have a genuine six iron on the bottom of it ... Unfortunately, the suit is so stiff, I can't do this with two hands, but I'm going to try a little sand-trap shot here."
Though he initially said that the second shot went "miles and miles and miles" in the moon's lower gravity (who was there to check?), it apparently was really in the 200 to 400 yard range. 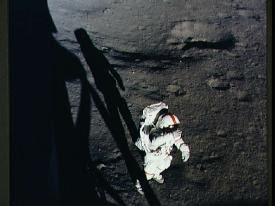 And you think you have trouble getting a tee time.
Interestingly, if you think it was the event that inspired the ad, think again: Shepard took his "moon shot" in 1971; True Temper's ad ran in 1969.
History Technology The '60s