Koss, the Owl & the Pussycat

December 19, 2010
What's going on in this 1971 ad from Koss? Is it a couple of middle-agers dabbling in the '60s sexual revolution, and ending up indulging other passions instead (his, high-brow music, hers low-brow TV and bon-bons)? 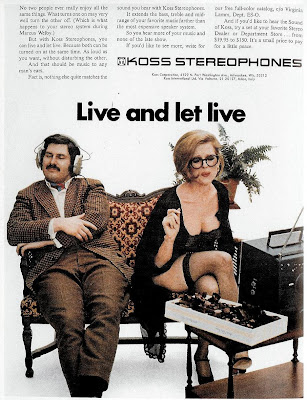 "No two people really enjoy all the same things," the ad begins. "What turns one on may very well turn the other off." And so we get that staple of the '60s movie and TV relationships, the sexed-up woman and the oblivious man.
The innuendo aside, it's an interesting choice for portraying domestic differences. Assuming it even is a domestic scene. Who's to say it isn't some misguided post-coital scene of a, shall we say, more professional transaction?
It's up the reader to decide, but I'm pretty sure the ad creators were inspired by this hit movie from the year before: 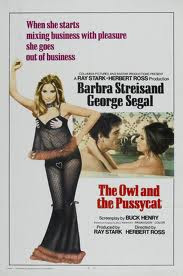 "The Owl and the Pussycat" was based on a Broadway play (and not the 1871 children's poem by Edward Lear) and adapted to a film starring George Segal as an intellectual writer (the "owl") who gets involved with the coarse actress/part-time hooker next door. Though the play presented it as an inter-racial romance, in the transformation to film, it became more of a mainstream "odd couple" romantic comedy -- at least as mainstream as a film with a comedically foul-mouthed prostitute as a romantic lead could be. 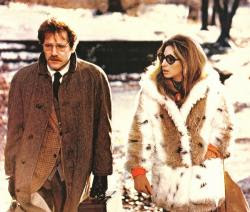 Incidentally, I owe making this connection to Mad Magazine, whose movie satires in the 1970s gave me some awareness of the movies that I was much too young to see. In fact, I still remember one of the gags in the September 1971 parody, "The Foul and the Prissy Cat." It showed Barbra Streisand's expletive-spouting character modeling that racy lingerie before George Segal... 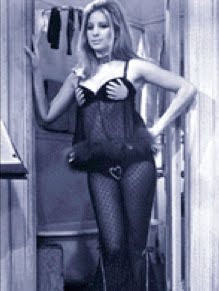 ...and Segal's character stammering, "I...I think the hands are in the wrong place. They should be covering your mouth!"
Ads Celebrities Movies Pop Culture The '60s