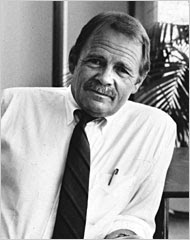 The ad industry lost another legend this week.  There isn't much I can add to this obituary for Hal Riney, who passed away at the age of 75, except to say that -- in addition to all the success his commercials brought to Saturn cars, the Reagan re-election campaign and Bartles & Jaymes wine coolers, among other clients --  probably the highest compliment he's earned is this:  In advertising circles, during the '80s and '90s, his name alone became synonymous with the style of advertising he was most famous for.  When you'd say to your partner, "let's do a Hal Riney spot," you both knew what that meant -- a montage of warm images of Americana, sweet, soft music and an laid-back announcer expounding on the simple virtues of life  (and that was usually the cue to attempt your best Hal Riney impression, since his distinctive voice narrated many of his best spots). Like this one:

Yes, the "Hal Riney" spot, in the hands of its imitators became a syrupy cliche, but when Hal himself was behind the commercial, it felt genuine and heartfelt.
creative people Icons