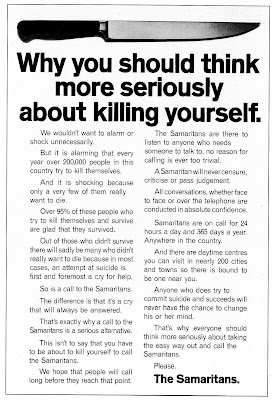 One of the rarely acknowledged risks of creativity in advertising is when, in the pursuit of your muse, you end up sending a message that is the exact opposite of what you've intended -- without ever realizing it.  Take the ad pictured above, created sometime during the 1980s for The Samaritans help organization.   You can easily follow the creative train of thought.   Use a provocative headline that seems to invite suicide in order to draw attention to a serious discussion about the problem of suicides.

But here's where the train gets derailed.  According to my wife, the psychologist, for people in desperate state of mind, a headline like the one above -- instead of forcing them to reconsider the idea of suicide -- can actually act as granting them permission to attempt the act.  Similarly, ads for addictive behavior like drinking or gambling that portray this behavior -- even in a negative light -- often end up reinforcing the very behavior they seek to control.

In other words, sometimes we're just too clever for our own good.  And that's something creative people need to think more seriously about.
Ads Creativity Culture