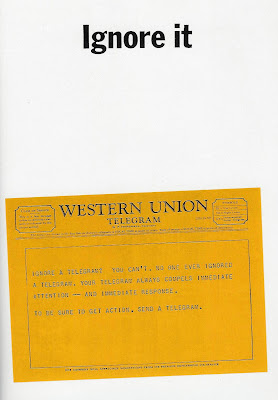 Western Union's telegram service went the way of the Pony Express recently, but for 145 years, its distinctive yellow messages were virtually synomomous with the idea of urgency. This clever 1960s ad got to the gist of it quickly with a simple, counter-intuitive headline. "Ignore it," Western Union commanded, knowing that no one would.  Point made.
By the way, the first telegram, sent by Samuel Morse in 1844, contained the awestruck message, "What hath God wrought?" -- and by pure coincidence, paraphrased in last Thursday's post, here.
Ads