November 15, 2010
This 1969 ad isn't first to observe that, "Once upon a time, it was easy to tell the girls from the boys." In fact, in the years since the Beatles popularized the shag cut (and long hair became the hippie style of choice), that had long since become a stock punchline among the Bob Hope/Johnny Carson set.
But this ad seems even more confused than most: 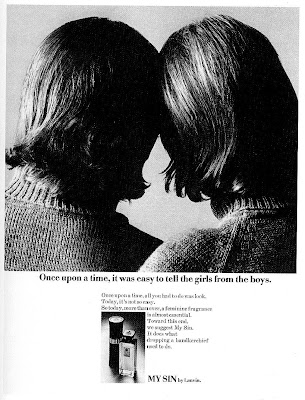 We get it, we get it. Seen from behind, boys in long hair look like girls. But the copy goes on,

Once upon a time, all you had to do was look.
Today, it's not so easy.
So today, more than ever, a feminine fragrance is all but essential...

Wait a second. Is the problem long hair on men or does it have something to do with males having androgynous features?
And is this a fear that women of that era were supposed to relate to? That men weren't approaching them because of the mistaken assumption that they were men, too?
On the other hand, maybe that fragrance was to help the both of them identify who was who in the relationship. Oh, those crazy, anything-goes late '60s...
Culture Pop Culture The '60s