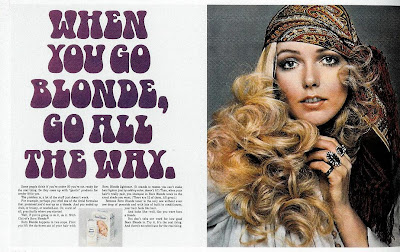 Of course, what else would you expect from the company that introduced the first one-step home hair-color formula five years earlier with this memorable teaser: 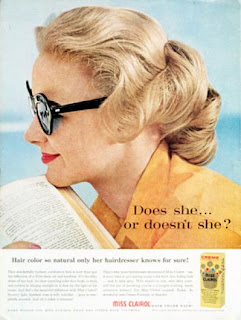 The 1969 ad at top, for a coloring formula with deceptive but irresistible name, "Born Blonde," foregoes that coy innuendo of an earlier era for a more leering come-on befitting the late-'60s sexual revolution (complete with the faux-psychedelic typeface of the free-love generation). As Wikipedia explains,

(And of course, it helps when the film adaptation of said novel starred Marilyn Monroe.)
Clairol took that idea of the special appeal, and really ran with it, with headlines like "If I have only one life, let me live it as a blonde." and this one, which, later switched to a declarative sentence, remains embedded in our popular culture: "Is it true blondes have more fun?"
(By the way, that's '60s supermodel and '70s TV actress, Susan Blakely, in the paisley scarf -- a natural blonde apparently, but never mind. You can see a video retrospective of her modeling career and other ads she appeared in here.)
Icons Pop Culture Slogans The '60s

Paul Duca said…
Just discovered your site, thanks to your comment on Ken Levine's. I see myself coming here often.

Don't forget, it was a woman copywriter, Shirley Polykoff, who coined both "Does She or Doesn't She?" and "Only Her Hairdresser Knows for Sure"

Also...when LIFE magazine resisted publishing a "Does She" ad, Clairol challenged them to prove their claims of salaciousness. The magazine put the ad before a review board. None of the women on it felt it had sexual overtones, but all the men did
(LIFE ultimately ran the ad).
November 29, 2010 at 6:06 AM