Who's under the trench coat?

November 08, 2010
Back in the glamorous heyday of airline travel, airlines often tried to sell you tickets based the idea of exotic travel as a way of resuscitating your relationships, and more frequently, by subtly (and no so subtly) dangling the fantasy of a romantic liaison with one of their young and shapely (but with a girl-next-door appeal, naturally) fight attendants.
This 1963 ad from Germany's Lufthansa Airlines cleverly manages to do both: 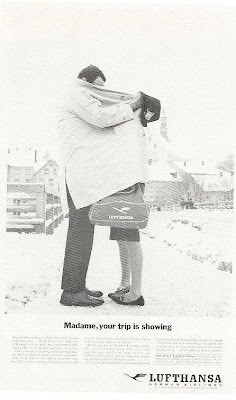 Are they husband and wife, or passenger and stewardess? Don't look to the ad copy to give you any clues:

Make of it what (and who) you will. But given the airline-branded bag the woman's carrying, the coy ingenue-like turning in of her feet as she's (presumably) being kissed, and the business attire of the man, and I'm thinking, well...obvious, isn't it?
Airline Ads Marketing The '60s