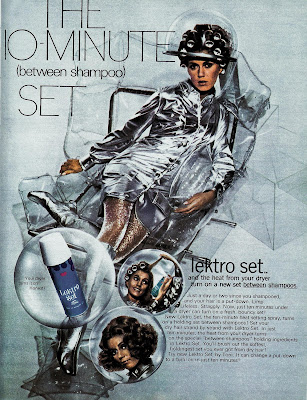 Obviously, from the silvery apparel the model is wearing, based on the aluminum-coated nylon spacesuits of the Mercury U.S. Space Program (which was put the first human in orbit around the earth). 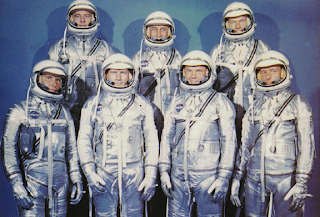 Even though the Mercury Program (and its distinctive Mark IV space suits) had ended 6 years earlier, the look was just too iconic to be simply cast aside for the bulkier more utilitarian-looking suits of the Gemini and Apollo programs. In fact, the Mercury look" was perfect for mid-'60s TV shows that wanted to seem other-worldly or futuristic. 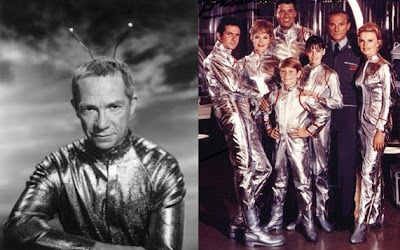 (That's "My Favorite Martian" and "Lost In Space," for you non-boomers.)
History Icons Pop Culture The '60s The Future

"Why is it that everyone in the future has to wear the same outfit. Some sort of silver jumpsuit.

Did someone in the future say 'Listen everybody. We're going to visit a whole bunch of far-off planets.

marciamarciamarcia said…
When I was growing up, I loved "My Favorite Martian", "Lost in Space", "The Jetsons" (and, of course, "Twilight Zone").

Love the ad (and the references). After these shows came--naturally!--"Star Trek", both TOS & TNG &, to a lesser degree DS9. Yes, love all things futuristic/space-related.

If you need any more images for your site, I have a ton at Velma's Retro Clip Art. Credit isn't necessary (I didn't make the images, I just scanned & posted them), but always appreciated!
December 3, 2010 at 3:22 PM