It happened one ad...

November 03, 2010
Here's a pretty innocuous, run-of-the-mill 1950 ad from Jockey, with the typical over-inflated claim. But there's something intriguing of about the illustrated model with the weathered but still handsome looks and that insouciant smile. Could it be--? 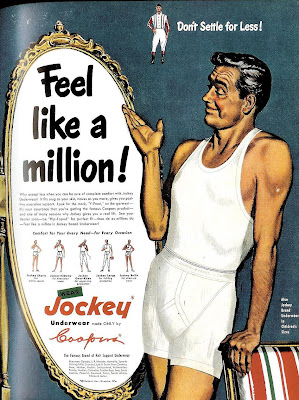 You decide. Here's a side by side comparison between the man from the Jockey ad and silver screen legend Clark Gable: 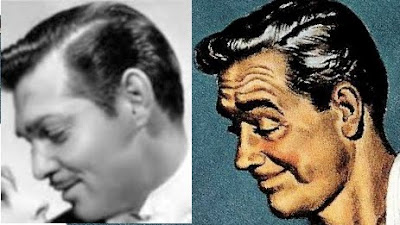 Coincidence? Maybe, but it sure seems an intentional homage, doesn't it? If so, then the question that naturally follows is, why?

I'm guessing it was a bit of an in-joke between the illustrator and client, referencing Gable in 1934's "It Happened One Night." According to pop culture lore, when Gable took off his shirt in that film and revealed a bare chest, undershirt sales supposedly plummeted by 75%. Could be the ad-makers, needing a face for their model, found it funny to show a Clark Gablesque fellow in both undershirt and underwear -- poetic justice, I suppose for his inadvertent effect on the foundation garments industry.
(By the way, though the Gable undershirt story has endured for 7 decades, it's been more recently called into question, if not outright debunked, at Snopes.com.)
Artists Celebrities Culture Movies The 50s