Talking back to "The Man"

November 01, 2010
Several months back, this blog looked at a couple of ads from the 1960s that grappled with the social upheaval of the period by trying to see things (if occasionally awkwardly) from the "black perspective." Today, let's see how the media addressed similar topics when speaking more to their "white" audience.

And right off the bat, we see a more confrontational attitude designed to put the reader on the defensive: 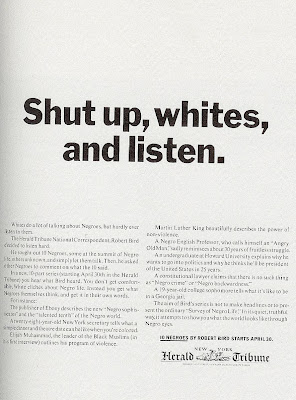 The above 1963 New York Herald Tribune ad begins with the statement that "Whites do a lot of talking about Negros, but hardly ever listen to them. The copy continues its aggressive tone by telling us what not to expect:

You don't get comfortable, White cliches about Negro life. Instead, you get what Negros themselves think, and get it in their own words.

(Don't be offended by racial labels; those were the terms of the times.)
Almost a decade later, society's continuing struggle with racial issues (along with family and sexuality issues) resulted in this ad for CBS public affairs programming: 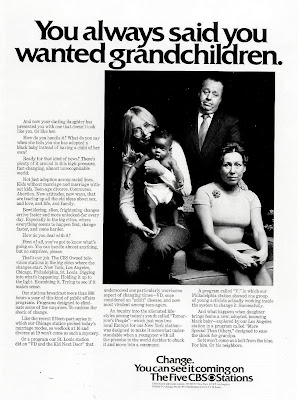 Although it looks almost comical now (almost like some forgotten Norman Lear sitcom), you can imagine how it probably shocked and offended the traditionalists of the day. Interestingly, the copy makes clear that the scenario represents interracial adoption, leading one to believe that the issue of interracial marriage was too hot for even this ad.
Culture Media The '60s The '70s