A "big idea" keeps getting smaller

Back in the early ‘80s (that’s the decade, not my age) when I was majoring in advertising in the School of Journalism at the University of Minnesota, the J-School was better at teaching theory and practical skills for writing and art direction. Developing your creative problem-solving skills was, in retrospect, left more up to a student’s own initiative.

So it was in the midst of a group project for a media planning class – creating a campaign for Kentucky Fried Chicken – that I decided, as long as we were specifying billboards, why not show a billboard idea, too?

I came up with a message that was short, clever, simple – and looked like the typical “creative” advertising billboard of the period. In other words, it was a pun: 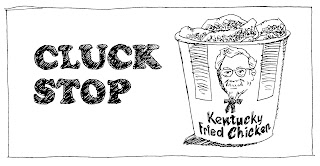 (This isn’t my original sketch, but it’s pretty much what it looked like back then.)

"Cluck Stop," as in truck stop – get it? Okay, with the benefit of hindsight, it’s no real creative triumph. But at the time, it was a leap forward in my creative development, and my understanding of what legendary ad man George Lois would call "The Big idea." My idea may have been big only in comparison to the other ads I'd created for class assignments, but I liked it.

After graduation, when I trying to put together a portfolio of “spec” (speculative) ads that would impress a creative director enough to hire me, I decided to build out my KFC billboard into a series. Showing a campaign of multiple ads made you look more versatile – at least that was the thinking.

So, figuring I would keep the layout the same, I just needed another couple headlines, ones that were equally clever, equally simple, equally … punny … 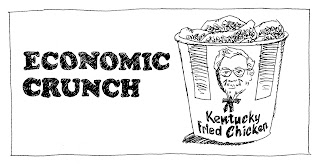 “Economic crunch” was a phrase that was in vogue back then (and now, maybe today, too) and positioned KFC as a lower cost dinner alternative. But while they do offer an extra-crispy option, is “crunch” really the right word? Looking back, it seems more appropriate for a snack chip.

Luckily, I had recently become aware of a certain term for a young chicken. In the right word-play, I could use it to emphasize the “fast” in KFC’s food. Thus: 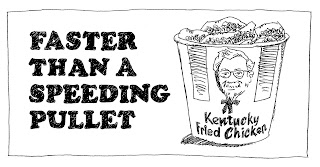 I suppose the paraphrasing of Superman’s catch phrase was clear enough. But how many people know the meaning of the word pullet? I didn’t realize it right away, but eventually it dawned on me – probably after a lackluster reception during a job interview – that my campaign hadn’t multiplied the inspiration of my original billboard.

Instead, like copies of copies, the next two executions were just progressively weaker and less defined. By the time I got to board #3, I went from word play that anyone could appreciate to a joke only chicken farmers could love.

Before I could get my first job, my KFC campaign would need to go. To kick the bucket, so to speak.

(Forty years later, and still with the chicken puns …)