The best headline I wasn't supposed to write

April 18, 2022
At one of my earliest ad agency jobs, in the mid 1980s, I was assigned to the B. Dalton Bookseller account. Before this regional retailer was swallowed up by Barnes & Noble, our agency was tasked with creating the chain’s co-op ads. These promoted one or more new books, with the book publisher sharing the cost of the ad.

Each week, I would get a stack of job orders for writing the latest co-op ads. That involved reading a photocopy of the book jacket and using what it said to summarize the book in a few sentences – and most importantly, and write a short, punchy headline to run next to a photo of the book cover.

I used to call it doing “ad sprints,” after the “wind sprints” I hated running in phy-ed class. But they were a great learning experience for a young writer, teaching you to think and write fast.

Two examples: For the published script of the David Mamet’s play, Glengarry Glen Ross, I wrote, “Pulitzer Prize won by con men.” (Okay, the actual headline was a lot wordier but I was still learning my craft.) For a book (whose title or author I can no longer remember) about someone in a midlife crisis who moves to California, “Where do lost souls go to find themselves?” 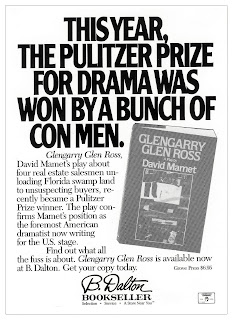 And then there was the book, Who F*rted? by Phillip Cammarata.

(Sorry for the asterisk, but anyone who knows me knows that I never use that word, in conversation and especially not in print. My sense of humor may occasionally veer into bawdiness, but when it comes to that particular verb, I am unshakably prudish.)

It was slim paperback collection of photos from early 20th Century movies, each picture featuring one or more people with embarrassed or quizzical expressions that suggested someone in the scene had committed this most offensive of social offenses.  (See? I’m already back to euphemisms.)

I thought it was an odd choice for an ad, but co-op dollars were calling the tune. And as a young writer, and it was more important for me to do a good job than question the assignment. (As a curmudgeonly senior writer once put it, “Someone’s going to take their money, it might as well be us.”)

So, despite my disgust, I gave it the same effort I put into my other co-op ads – unaware that I was being set up by the account exec and the senior writer on the account. When I turned in my copy, the AE confessed that it was a joke and they thought I’d already figured that out.

(Don’t assume anything when it comes to me. Co-workers once hid a smashed Halloween pumpkin in the back of my desk drawer and waited eagerly for me to wonder aloud about the odor in my office.  After several weeks of fruitless anticipation, they revealed the rotting pumpkin, which for some reason I never smelled. I guess I never opened that drawer.)

As for the fraudulent ad for the flatulent book, I wasn’t angry about being taken in or having my time wasted. Mostly I was disappointed because I had solved the problem with a headline that appropriated the title of Mason William’s 1968 top-forty hit – neatly tying together the subject matter and the classic-movie photos: