What can "The Golden Girls" teach us about advertising? 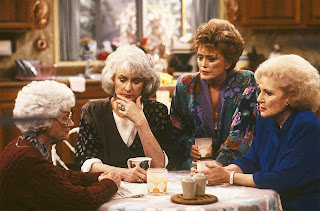 In his book, The Last Great Ride, Brandon Tartikoff, NBC programming wunderkind in the 1980s, noted the secret ingredient in many successful TV series was what he termed an S.U.P. – and no, that isn’t a cousin to ALF.

S.U.P. stands for Satisfying Underlying Premise; in Tartikoff’s words, “a secret ingredient that makes [viewers] feel good about their lives ... something in the basic premise of the show that validates some reassuring notion that the audience would like to believe is real.”

Such as the idea that, as senior citizens, we can have fulfilling lives of friendships and romance (The Golden Girls).

Or our desire for a place where you can escape your troubles and just hang out “where everybody knows your name” (Cheers).

And … I guess … how great it would be to have a crack team of lovable mercenaries you can count on to help you out of a jam (The A-Team).

But this goes beyond NBC’s hits of the ‘80s. You’ll find the S.U.P. in Friends, Frasier, Will & Grace, Sex & the City, Northern Exposure, The West Wing, even The Office.

And the S.U.P. isn’t just evident in TV shows – that same DNA can often be found in the commercials that surround TV programs as well.

Looking over Ad Age magazine’s list of the Top 100 Campaigns of the 20th Century, you’ll see many examples.

Back in 1971, McDonalds told us that you could enjoy an informal meal with your family and that “you deserve a break today.”

AT&T’s “Reach out and touch someone” campaign (1979) told little heartwarming stories of long-distance calls helping us stay connected with friends and family.

Too saccharine for you? You’re probably mistaking the style of the commercial for its substance. But the S.U.P. doesn’t apply to just so-called “slice of life” advertising.

Think of Volkswagen’s groundbreaking “Think Small” campaign (1959), which reassured us that you could be happy without conspicuous consumption and “keeping up the Joneses.”

Apple’s 1980s campaigns that demystified computer technology and showed how it could become an instrument of personal expression.

And Nike’s “Just do it” campaign (1988), which celebrated everyday athletes as well as the professionals for their relentless pursuit of fitness.

If modern marketing is all about connecting with customers through storytelling, through understanding their lives, needs, and desires, and speaking with authenticity, a good place to start is posing the S.U.P. in your project briefs.