The 'Devil, you say?

They say hindsight is 20/20 and that was proven again with the following short essay which I wrote five years before the runaway success of the first Iron Man film made possible the Marvel platform strong enough to launch both familiar and unfamiliar characters – including the Netflix Daredevil series, which fared better than the movie version which would underwhelm critics, moviegoers, and most importantly, studio executives. So despite how events have invalidated many of the opinions below, it's still an interesting look into the state of superhero movies circa 2003. (Of course, 19 years later, we’re still waiting for a Sub-Mariner movie to surface, so I may have been onto something there.) 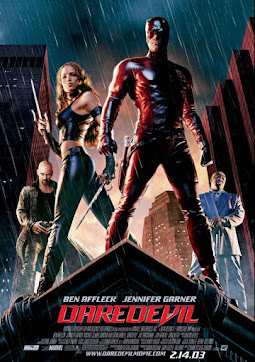 In the ‘60s, it was the big-screen version of the Batman TV show. In the 70s, we had Superman: The Movie Picture. The less said about Howard the Duck in the ‘80s, the better. And in ‘90s, Batman was back and hanging around for too many movies.

But in the 2000s, the genre really came out punching.

After the modest success of the first X-Men movie, and the monster success of last summer’s Spider-man film, production companies are scrambling to put other heroes on celluloid.  This year alone will see an X-Men sequel and the first cinematic appearance of the Hulk.

And oh yes, Daredevil,  which could have a bigger impact on the trend than either of those other two movies.

Because unlike the Hulk or Spider-Man or Superman or Batman, Daredevil is largely unknown to the non-comics-reading public (and these days, that includes just about everyone). And that obscurity applies to virtually all of the other comic book heroes now in development. The Sub-Mariner? Iron Man? The Black Panther? The Green Lantern? The Fantastic Four?

Right now, Hollywood has convinced itself that superheroes are the next big thing. The reality may well be that it’s not the superhero aspect that’s hooking audiences, but the familiarity of the concepts. Characters that have had mass exposure through past TV shows, even animated shows, have an audience that is more willing to accept the outlandish nature of the stories.

By contrast, unfamiliar characters in skintight outfits leaping over rooftops run the risk of just looking silly to adult moviegoers.

If Daredevil succeeds, even modestly, it’ll be perceived as simply riding the wave begun by the Spidey and the X-Men. But if it fails, a lot of people in Hollywood are going to think twice about investing tens of millions in movies built around comic book heroes with no awareness by the general public. (For this devil, it seems “Damned if you do, damned if you don’t.)

Sure, we’ll still see new Superman and Batman movies eventually. And maybe Wonder Woman someday. And more Spider-Man, of course. But they’ll probably end up being the exception more than the rule. Instead, we’ll see more movies that use comics as their source material but bury the association, like Blade, Men in Black, and Road to Perdition.

What? Didn’t know those last three were based on comic book stories? That’s just the way the studios wanted it.

In other words, don’t hold your breath, Sub-Mariner.
Marketing Movies