"Greetings to all you shameless hucksters and flim-flam men!"
So began the opening remarks by host of the 1987 awards show for Minneapolis advertising. As the writer for the ceremony, I was responsible for his script, as well as the introduction for his surprise appearance:

We asked ourselves … what person exemplifies the prestige and high standard of excellence for which this show is renowned?

What person was secure enough in his or her own fame to share the spotlight with a series of commercials and print ads? Finally, what person possesses both a sense of humor and a sophistication to make the presentation vibrant and entertaining, yet respectful of the advertising it honors?

These were the questions we asked ourselves. Unfortunately, we couldn’t come up with any answers, so we asked a couple more questions: Who was available? And who could we afford?

Ladies and gentlemen, join us now in welcoming our host for the evening … national celebrity … television star … and the answer to at least two of our questions … LARRY BUD MELMAN!

Today, he seems all but forgotten, but to those of us who religiously watched Late Night with David Letterman in the 1980s, middle-aged, portly Larry Bud Melman was a comedic foil for Dave in a series of stunts and skits. Played by Calvert DeForest, a former drug-clinic receptionist with very limited acting experience (and ability), he tended to deliver all his lines with a forceful stiffness. Yet despite (or because) of this, and he had a stage presence and authenticity that made him a source of hilarity for hip, young viewers – of which the Minneapolis ad community had more than our share.

So Larry Bud was a definite “get.” The crowd exploded when he ran in from the back of the auditorium to an accordion rendition of Led Zeppelin’s Whole Lotta Love, handing out “toast on a stick” to audience members (“Bread's answer to the Popsicle,” per one of his best-known gags on Late Night.) 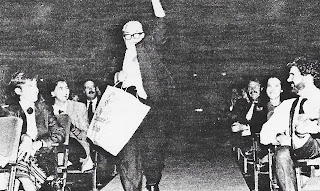 As host, Larry would deliver brief lead-ins to each of the award categories with the kind of brash, snarky humor that he delivered for Letterman – here, skewering the ad community’s creative egos and dreams of award-show glory:

H.G. Wells once called advertising the rattling of a stick inside a swill bucket. But I disagree. Mr. Wells has done a great injustice to your profession – and to the makers of swill buckets.

Tonight, we honor the best of Minnesota advertising. But if you’ve seen me on TV – where I’m a major star to millions of insomniacs – you may be wondering what interest I could possibly have in a profession that exists for no reason but to inform me that I’m overweight, poorly dressed, balding, unclean, dull, tired, and alone.

But hey, I’m not bitter!

When I was first approached about hosting your show, my initial thought was, “Wow, how can all those egos fit into one room?” But tonight, I see you all, not as a flock of strutting peacocks, but as the insecure, whimpering children you are.

So yearning for approval and a modicum of self-respect, you set up this award show – and in the process, subject yourself to further abuse and humiliation. You agonize whether your ad will win, and are devastated when it doesn’t; or frustrated if it doesn’t win enough.

All the while, looking on in green-eyed, twisted envy, as your friends go on to greater glory and more awards, leaving you consumed by a smoldering bitterness and a sense of failure that will haunt you for the rest of your wretched, unfulfilled lives.

I’m just glad I could be a part of it!

(Yes, it was a bit overwritten, and I overestimated Larry’s ability to deliver my run-on sentences, but some of that was fixed when I realized I had to write my script on cue cards, and frantically edited the sentences where I could.)

As I stood at the back of the auditorium with Larry’s manager, he complimented me on my writing, that I really captured the voice of Larry’s character. I don’t recall much of the reaction to Larry’s monologues, but I did hear a lot of rave reviews from people afterward, so enough of his jokes must have landed.

Or maybe Larry just said what was all on their minds, when he ended with:

For one special night, the back-stabbing, cut-throat world of advertising can forget its dislikes and differences, and gather together to talk … to laugh … and to agree, that, once again …

…IT WAS A LOUSY AWARDS SHOW!