And the world is changed forever...oops, maybe not

April 09, 2008
In early 1990s, this radio spot for a local auto dealership didn't just break the mold of hyperbolic sales managers hyperventilating for their sale prices -- it chipped away some of the hucksterism that has helped give car salesmen one of the least trusted professions in America (the ad biz is never far behind, but that's a topic for another day). 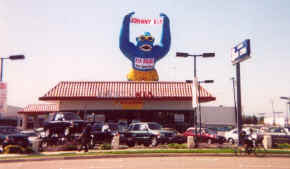 As delivered in a thoughtful deadpan, the commercial took on one of the most prevalent and ridiculous sales gimmicks of car dealers. The genius of the spot is how benign it sounds, yet how lacerating the words truly are.

Recently, Jim Paul of Valley Olds Pontiac GMC was driving to work when...he noticed a large inflatable gorilla floating above another dealership.  He'd noticed several of these inflatable devices floating above car dealerships lately and he asked himself some questions.  Did anybody ever go into that dealership and say, "Great gorilla.  Makes me feel like buying a car."  Why don't other businesses use gorillas?  Would people be more likely to buy, say, a new home with a gorilla tethered to the chimney... Would people have more confidence in their doctors if a medical clinic featured a gorilla on the roof?

Then, the announcer delivered the killing blow:

Without car dealers, would there even be an inflatable gorilla business?

By the time the spot ended, it had so memorably mocked the idea of the inflatable whozits -- and not with name-calling by rational thought alone -- and so deflated (yes, pun intended) the credibility of those who employed such gimmicks, it seemed that the inflatable gorilla would vanish forever from the roofs of car dealerships, at least locally.
Then, last weekend, I drove by a big pink gorilla looming over a dealership in the area. A plea to Jim Paul and Valley Olds: Please start running your commercial again.

Postscript: In 2003, as part of its series of faux tributes to "Real Men of Genius," one of their radio spots included this copy:

Great. Now that we're embracing them as kitsch, we'll never get be rid of 'em.