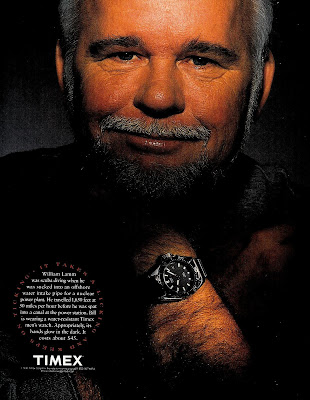 Back in 1990, Timex ran a nifty series of ads that returned to their classic "takes a licking but keeps on ticking" position but in a new context of quirky human interest stories. Like the watches they're modeling, the featured people also took a licking and kept on ticking, though the ads sometimes seemed more like tributes to recklessness, lucklessness, carelessness and in at least one occasion, cluelessness.

Among others, the campaign profiled a man who fell out of an airplane, a woman who had a bowling ball dropped on her head from three stories, a guy who attached weather balloons to an aluminum lawn chair and floated up 16,000 feet, even a dog who was buried after being mistaken for being dead. And then there's the tale of the guy pictured above: 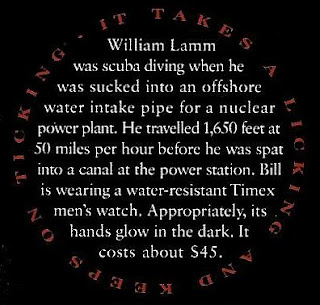 Could have happened to anyone, right? Nevertheless, a very engaging ad campaign.
Ads Marketing