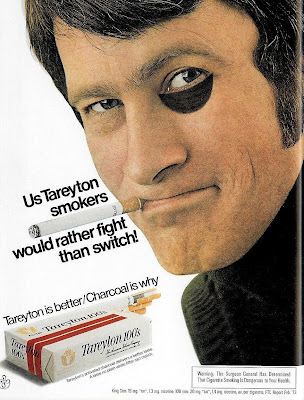 One of the most-read writers of post-WWII advertising died recently.  Funny thing is, William H. Stewart didn't work in advertising, or even big business.  As Surgeon General during the Lyndon Johnson administration, Dr. Stewart instituted the health warnings that began appearing on cigarette packages in 1966:

Actually, the first of the warnings was a bit dodgier -- "Cigarette Smoking May Be Hazardous To Your Health" -- but the wording was toughened up by 1972, when the warnings became mandatory for cigarette advertising, too.  Those ubiquitous stark white boxes had a prominence that other legal disclaimers could escape, and always seemed to be at odds with the carefree attitude of most cigarette advertising.  Then again, for a few brands  -- the tough cowboys of Marlboro and the pugnacious smokers of Tareyton -- the warnings probably subtley enhanced their maverick images.
Today, the warnings are even more blunt -- "Smoking Causes Lung Cancer, Heart Disease, Emphysema And May Complicate Pregnancy" -- and cigarette advertising increasingly harder to find, but you can still enjoy the legacy of Dr. Stewart in the many, many ads over the years that have done their version of the  "Surgeon General's Warning" (like this 1999 Sony ad): 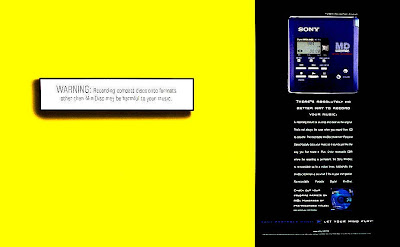