April 16, 2008
In an earlier post on Virginia Slims, I introduced the idea of the Zeitgeist Brand, a product whose image and popularity is closely, even indelibly linked to the era in which it was introduced or gained prominence. Here's another one: 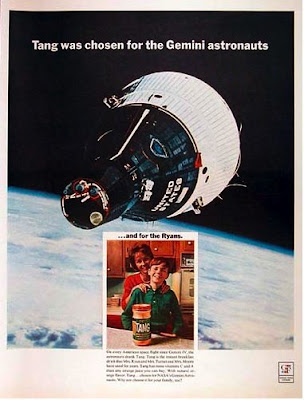 Though Tang was launched in 1959, it took a launch of a different kind before the orange-flavored breakfast drink by General Foods really took off.  After 6 years of lackluster sales, the powdered drink was chosen by NASA for   the Gemini spaceflights, NASA's second series of manned spaceflights -- 10 in all -- during the years of 1965 and 1966.   It was in the era of public fascination with the space program, and General Foods played up the connection at every opportunity, until the product itself was indelibly known as the orange drink of the astronauts.  To a kid in the 'sixties who dreamed of space walks and moon exploration, Tang brought you one step (or maybe one sip) closer to your heroes.
Of course, as public interest in the space exploration waned, the halo effect that was pumping up sales of Tang also dissipated.   That Tang couldn't retain the same levels of popularity based on its merits alone was probably foreshadowed in the very reason it was chosen for the astronauts.  According to a NASA engineer, water that was being produced as a byproduct of the Gemini capsule's life support system, was drinkable, but poor-tasting.  Adding Tang to the water made it more palatable. 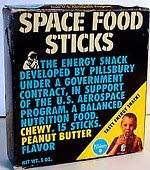 Not exactly the most ringing endorsement for a product; it may have been a drink for astronauts, but judged on taste alone, a lot of moms and kids didn't think the watery, grainy orange concoction was much of a drink for earthlings.  (The same fate would befall Pillsbury's attempt at zeitgeist-channeling, Space Food Sticks.)
Tang is still around -- a recent reformulation has replaced much of the sugar with artificial sweeteners in a bid to stay relevant in our obesity-obsessed culture -- and still remembered best for its Gemini connection, but like the culture's interest in space exploration, Tang will probably never reach such heights of popularity.
Ads Culture Marketing