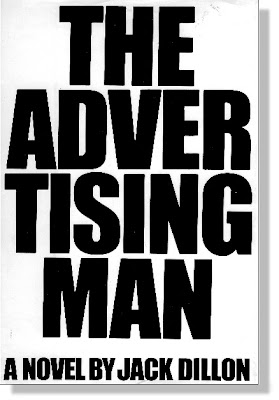 "I think advertising's had it.  I don't think people believe in it anymore.  I think it's a waste of money.  I'm not even sure it's moral."
So opines one character (in a new business presentation no less) in Jack Dillon's 1972 novel, "The Advertising Man."  Though set a decade later than AMC's "Mad Men" series, it covers a lot of the same territory, including creative turf wars, double-dealing management and marital discord in the Connecticut suburbs.  And lots and lots of creative angst by people who are convinced they're last line of defense against creeping mediocrity, even as battle fatigue is taking its toll.   (Some things never change.)
Written with empathy and perceptiveness about day-to-day ad agency life (few big explosions, lots of little implosions) -- which isn't surprising, since the author was a V.P./creative management supervisor at legendary creative powerhouse Doyle Dane Bernbach.
books