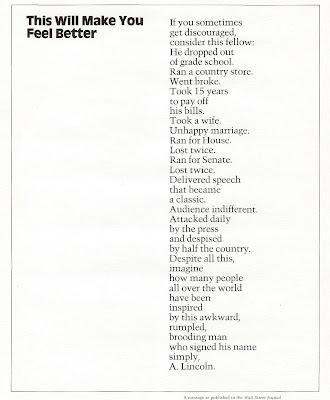 Here's an ad with a sell that's so soft, it's almost non-existent.  That little teeny-tiny line of type waaaaay at the bottom identifies the sponsor as United Technologies Corporation, a multi-national manufacturer of aircraft engines, fuel cells, elevators and missile systems, among other products.  Maybe with such a diverse product line, the company simply gave up trying to find a unifying message and instead went for a series of motivational messages that ran in the Wall Street Journal during 1982-83.

This is one of my favorites.  Like the other ads in the series, it has a simple layout, simple headline and short, simple sentences, all to put across a simple a message with universal appeal (one of the other ads, in fact, advised to "Keep It Simple.").  If they had pictures of humpback whales and primeval forests, you'd probably still see them posted in corporate cubes today.   Of course, whether this spurred manufacturers to line up to buy jet engines is anybody's guess, but periodically, big, faceless corporations need to put on a public face.  So why not be a face with a smile?
Ads