Who are you calling crazy?

January 18, 2008
You know advertising has a problem as an industry when even a prostitute gets to be romanticized as a principled, compassionate individual (Julia Robert's recruitment film for the skin trade, "Pretty Woman."), yet we continue to be blamed for all that's wrong with modern society.
In the eyes of Hollywood, we're talentless hacks at best, professional liars at worst and materialistic fools at the least.   Yes, there are rare exceptions, but generally, when someone in the movies works in advertising, you instantly know that person is going to be either vapid, vain, materialistic, manipulative, unethical, back-stabbing, glad-handing, one sedative away from a nervous breakdown, or a combo platter of all the above. 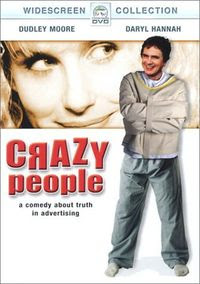 And then there's "Crazy People," the 1990 movie that not only features every cliche above, but manages to wrap them into a  smug screed about the dishonesty of modern marketing.
"Crazy People," purports to expose advertising as an industry of snake-oil salesmen by casting Dudley Moore as a copywriter whose insistence on telling "the truth" in his ads convinces his colleagues that he's insane.  (As if Hollywood was ever cared about truth; if it did, every picture Mr. Moore made after "Arthur" would have been advertised as "Yet Another Bad Dudley Moore Movie.")  In its undisguised hostility towards advertising, this is a movie that equates persuasion with lying and mistakes cynicism for honesty; when Mr. Moore's ad for a sports car reads, "For men who'd like hand jobs from beautiful women they hardly know," that's not "the truth:"  that's just a coarser, more blatant marketing ploy.
You know, like the way Hollywood keeps sneaking sexy imagery into movie previews.
This wraps up this week's special theme, "Advertising & The Movies" (you noticed that, didn't you?).  Next week, it's back to more ads, ad commentary and ad agency stories.  I can hardly wait.
Ads Movies