Read the ad! See the movie! 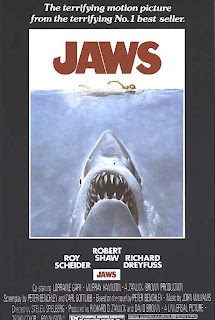 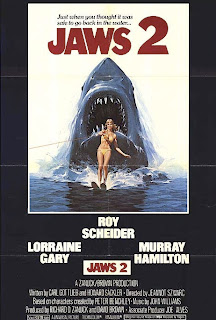 What?  Am I serious?  That miserable 1978 sequel that gave us with nothing, not even the simple satisfaction of seeing Murray "We're not closing the beaches!" Hamilton end up as a shark snack?  Yet, in it's own way, "Jaws 2" was just as much a harbinger of things to come as its predatory predecessor.  And it all started right here:

Yes, before Roy Scheider took his second dip into those shark-infested waters, taglines -- those pithy pearls of advertisingspeak -- were used only sporadically on movie posters.  Mostly, it was just flat-footed copy like what you find at the top of the first "Jaws" poster -- if there was any ad copy at all.  Sure, there were exceptions, but nothing before "Just when..." soaked into the public consciousness quite like it.  It didn't just launch a thousand parodies (probably beginning with  "Just when you thought it was safe to go back in the theatre..."), it inaugurated  a subtle change in movie marketing.   Like shaving cream, toothpaste and laundry detergent, movies could be sold with little more than catchy themeline.
A year later, when the first "Alien" poster was released with its own unforgettable line ("In space, no one --"  Do I really have to tell you the rest?), there was no turning back.  In fact, today, it seems entirely possible that studios are spending more time writing the themeline than the movie itself.
Ads Movies