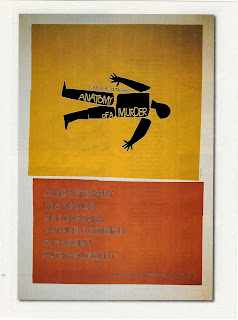 Back in 2001, Premiere Magazine ran their choices for "The 50 Greatest Movie Posters Of All Time."  As you might expect, much praise was heaped upon the one-sheets of Saul Bass (including the one above), for their graphic simplicity and bold, abstract imagery.  For my money, though, while his posters were aestethically pleasing, as come-ons for the movies they were advertising, they're a little...sterile.  You can appreciate it more as art than as as something that's going to make someone want to plunk down their cash for a ticket.  For a poster that's both graphic and intriguing, take a look at this one for "Rosemary's Baby." 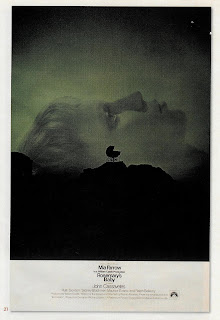 It's as minimalist (in its own way) as a Saul Bass poster, but the silhouetted baby carriage, with its dual suggestions of innocence and mystery, backed by the ethereal image of a vulnerable Mia Farrow -- is she mid-conception or giving birth? -- makes for an eerie, disconcerting and hard-to-resist advertisement.
Ads Movies