And now we come to this book 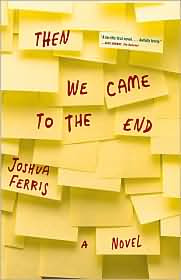 In the movie biz, it's first-time filmmakers making films about first-time filmmakers. In the ad world, it's people escaping ad agencies to publish novels about people trapped in ad agencies. I've already covered one of those -- and there's still a few more to get to, including this one by (as if I had to tell you) a former copywriter, Joshua Ferris. But what can I tell you about "Then We Came To The End" that you probably haven't already read in the numerous year-end lists that picked it as one of the best books of 2007?  I will admit to being a bit surprised by the accolades, but I did enjoy the book. Its run-on, chatty, stream-of-consciousness style perfectly captured the industry mind-set, the oddball charaters that people agencies and the pointless turf wars.  But in many ways, it's a pretty universal workplace cynicism that's been mined in both movies ("Office Space") and TV ("The Office") in recent years.
Strange as this may sound, what made it work for me was the lack of anything really significant occurring in the story (including the whimper-not-a-bang ending).  Just trudging through day after dreary day with these people, as they chitchat in the halls and scramble to look busy when somebody's watching -- by the end of the book, I did feel as caught up in their lives as I've felt with real ad agency coworkers in the past. It's been a couple of months now, but I kind of miss the old gang -- Chris Yop, Benny Shassberger, Amber Ludwig, Jim Jackers, Genevieve Latko-Devine, and the rest -- and wonder what they're doing these days.
books