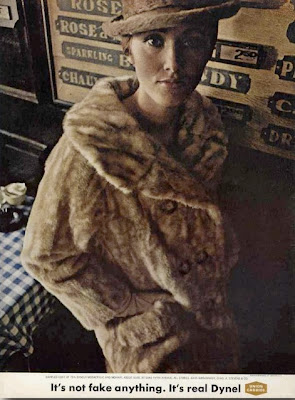 Before we move on to other subjects, here's one more brilliant 1970s-era campaign from advertising legend, Jane Trahey.  Not every woman could afford her other client, Blackglama, but Jane made sure they (and Dynel itself) didn't have to feel inferior because of it.  "It's not fake anything.  It's real Dynel." defined the product in a boldly unapologetic fashion that, but for its synthetic-sounding name (which just doesn't have the same futuristic appeal as when the folks at Union Carbide thought it up) could probably be just as effective in today's fur-averse culture.
Ads Icons